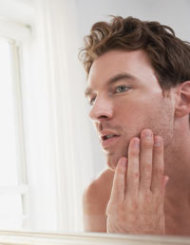 Here’s the truth: few straying men come home covered in lipstick stains and reeking of another woman’s perfume. While the signs are rarely that obvious, if you’re willing to look, they’re almost always there, according to Danine Manette, private investigator and author of Ultimate Betrayal. So how do you know if you’re paranoid or if your partner’s actually in the arms of another woman? Check out some changes in behavior that could mean he’s looking for love elsewhere.
Photo by Shutterstock

Related: What he doesn’t want you to know

1. Sudden Changes in His Appearance

If your husband starts transforming into a different man, it may be more than a mid-life crisis, warns Manette. “A man who drastically alters his clothing style, appearance or body shape for no apparent reason may be having an affair. Perhaps the other woman has suggested he grow a beard, wear his hair differently or use cologne. If he’s dressing differently for work, there may be a coworker he’s trying to impress.” Likewise, if your lifelong couch-potato spouse suddenly becomes a gym rat, it may not be you that he’s trying to impress. “He may be trying to look good for a new love interest or keep up physically with a younger woman. Or perhaps the other woman works or works out at the gym he’s showing a sudden interest in going to,” explains Manette.
2. His Attitude Towards You Dramatically Changes

Changes in his mood can point to more than just stressful times at work. “Men often get fidgety or irritable when they’re supposed to be in two places at once. If the other woman demands more of his time, he may start arguments with you so he can storm out and rendezvous with her,” says Manette. If he’s not only picking fights, but also criticizing you for things that hadn’t bothered him before, like your appearance, eating habits or intelligence, it’s probably not about the way you chew your food or the 5 pounds you’ve gained, but really about another woman. “Cheating creates a lot of internal turmoil and tension, which gets played out between the two of you. Plus, in order to cheat on someone, you have to be focused on what you don’t like about her. By making that loud and clear, he feels more justified in cheating and less guilty,” explains Jennifer Oikle, PhD, psychologist, dating coach and founder of MySoulmateSolution.com.

“Emotional distance is the number-one giveaway of infidelity, because it’s hard to be emotionally invested in two people at once and to be emotionally intimate with someone while you betray her trust. Most people simply can’t handle the guilt of cheating, so they create space. Plus, distance creates a shield, protecting him from detection-if he doesn’t say much, he’s less likely to say something incriminating,” explains Dr. Oikle. If your spouse avoids being alone with you and your conversations become purely superficial, he could be pushing you away because he’s growing closer to someone else. “Likewise, if he holds back the warm and fuzzies (i.e. he stops saying ‘I love you,’ no longer holds your hand in public or barely hugs you anymore), he could be cutting off his feelings of affection for you, so he can focus on his new partner without feeling as guilty,” says Dr. Oikle.

4. Guilty BehaviorGuilt-ridden behavior is a dead giveaway that your partner is hiding something. He may shower you with affection and attention (giving you gifts for no reason, complimenting you frequently or helping around the house more), but diamonds and doing the dishes aren’t necessarily the signs of an uncharacteristically sweet husband-they could indicate a guilty one. “When a man feels guilty, he may become unusually affectionate or attentive as a way to mask his affair or relieve some of his guilt,” explains Manette. On the other hand, some men may avoid their partners when they have something to hide, no longer making eye contact or attempts to communicate. “It’s likely that he won’t hold your gaze and engage fully with you, because he’s hiding a secret and he’s afraid you’ll see through him if you really look at him,” says Dr. Oikle.

It’s not just guilty behavior that should make you worry. Anything that can be characterized as secretive, unusual or unexplained-or any behavior that has suddenly and inexplicably changed-could signify that he’s hiding something, warns Manette. “If your partner becomes elusive about his whereabouts, something’s probably going on,” says Tony DeLorenzo, owner of All State Investigations and coauthor of Warning Signs: How to Know If Your Partner Is Cheating-and What To Do About It. Other indicators that something’s amiss? “The computer screen changing when you walk into the room, hushed telephone conversations or calls taken outside, strange body language when in the company of the new gal at work, reluctance to take you places with him and his friends, and general unexplained behavior that feels suspicious, are all clues that your partner is straying,” says Manette.
6. You Never See Him Anymore

If he’s suddenly never around, he may really be busy at work or he may be busy with someone else. While he’s likely to have a wide range of plausible excuses for his new absentee status (he’s working a lot of overtime, he’s traveling for business, he’s training for a 10K), they could just be an attempt to cover up the fact that his extracurricular activities involve another woman. “He could be spending the time away from home with her. Although the other woman usually accepts whatever fragment of time the man can give her at first, she typically begins to demand more and more of his time. Conversely, he may just not want to come home because he feels guilty,” explains Manette.

Are you suddenly finding it hard to get in touch with your significant other? Is his mobile phone turned off during times you normally can reach him, or does he claim not to have had any cell service for hours at a time? Or maybe he says he has business meetings all night or a work conference all weekend, so don’t call him, he’ll call you? According to DeLorenzo, if he’s frequently unavailable, it may be because he’s with someone else. “This is how he can spend time with the other woman without having to rush home. It’s his way of making sure he doesn’t have to worry about looking over his shoulder constantly and answering to you.”

Related: These tricks aren’t as sexy as you think

8. Your Gut Tells You Something Is Going OnIf you think he’s acting strangely, hiding something or seeing someone else, don’t ignore your instincts. “A woman’s intuition is the best thing we go by in our business. She knows all of her man’s aches and pains, when he is mad, happy or lonely, and when he’s there in body but not in mind. She knows when something is not right,” says DeLorenzo. In fact, it’s your instincts that will usually help you recognize the signs of an affair. “There are almost always clues, because it’s a complicated thing-mentally, physically and emotionally-so it requires a lot of adjustments to pull off. These adjustments will appear as something different about your partner and they may be subtle. That’s why it’s best to trust your instinct that something’s off,” says Dr. Oikle.
9. He Becomes a Different Man in the Sack

“Both more and less interest in sex can signal infidelity,” says Dr. Oikle. If he’s suddenly rebuffing your advances when he never turned you down before, he could be satisfying his sexual needs elsewhere. “While many couples experience changes in their sexual activity over time, if your spouse is never interested in having sex anymore, you should consider the possibility that he’s having an affair. His mistress may be giving him something sexually that he isn’t getting at home, or because it’s secret and new, it’s more exciting, so he puts all his energy into sex with her,” says DeLorenzo. Meanwhile, a sudden increase in his sexual appetite could also be the result of infidelity. “Engaging in sex with a new partner can rev up testosterone, increasing his overall drive,” explains Dr. Oikle. A third party may also be responsible for a sudden interest in experimenting sexually, according to DeLorenzo.
10. A New Woman Enters the Picture

If your significant other repeatedly talks about another woman you’ve never met, there’s a good chance she might be his new lover-especially if, when you question him about her, he says, “She’s just a friend,” but his enthusiasm is just a bit too much to believe. While you may assume no man would be stupid enough to actually bring up his mistress with his wife or girlfriend, experts say many men do. “Sometimes cheaters take the strategy of being half truthful, because in some ways it’s less of a heavy burden if half of the cat is out of the bag. Plus, he may be thinking about this new person so much that he can’t help talking about her,” explains Dr. Oikle.

11. He’s Overly Defensive“Why are you asking all these questions?” “Why do you care where I was?” “I was watching the game at Mark’s. If you don’t believe me, call him!” If these defenses sound familiar, your significant other could be up to no good. “When a man becomes overly defensive in response to questions about his whereabouts or behavior, it’s a huge sign that something is not right, because otherwise, he’d laugh it off!” warns Dr. Oikle. Meanwhile, if out of nowhere your partner accuses you of cheating, it may be because he’s been unfaithful. “Once a man sees how easy it is for him to become involved in an outside relationship, he begins to view his partner under the same moral microscope. Accusing you of infidelity is a way to deflect his own guilt and poor behavior,” explains Manette.
One Final Caveat…

Before you start following your significant other during his lunch break or hire a divorce lawyer, please take heed: If you’ve observed any of these signs, it doesn’t necessarily mean you’ve got a Tiger Woods on your hands. According to the experts, these behaviors only signal infidelity if they’re a departure from the norm. If your sex life has never been booming or if he’s always been weird about his computer, he’s probably not cheating. But if your once-regular sex life has dramatically dwindled and the guy who used to live in sneakers is suddenly sporting Gucci loafers and designer suits, there might be something else going on. “If things are good at home, you’re having fun together, having regular sex, then things are probably fine. But if you are having none of the above, then there might be a problem,” says DeLorenzo. Just remember, while one of these signs does not a cheater make, if you’ve witnessed a few, it’s time to have a talk. Even if he’s not having an affair, addressing issues in your relationship early on can prevent future infidelity, advises Manette.