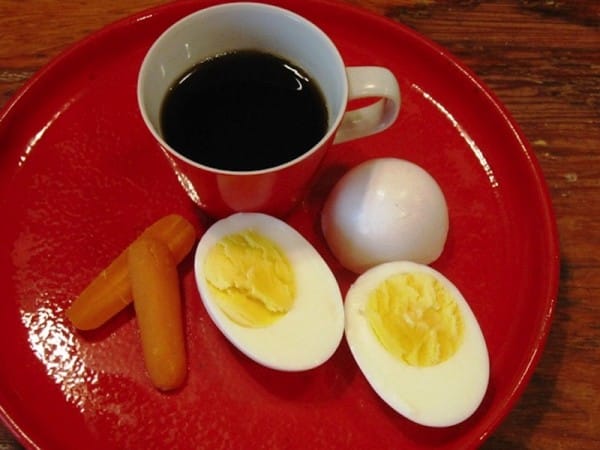 This is a good lesson for all of us, no matter what stage of life you’re in. You’ll see what I mean.

A young woman went to her grandmother and told her about her life and how things were so hard for her – her husband had cheated on her and she was devastated. She did not know how she was going to make it and wanted to give up. She was tired of fighting and struggling. It seemed as soon as one problem was solved, a new one arose.

Her grandmother took her to the kitchen. She filled three pots with water and placed each on a high fire. Soon the pots came to boil. In the first she placed carrots, in the second she placed eggs, and in the last she placed ground coffee beans. She let them sit and boil; without saying a word.

Turning to her granddaughter, she asked, ‘Tell me what you see.’

‘Carrots, eggs, and coffee,’ she replied.

Her grandmother brought her closer and asked her to feel the carrots. She did and noted that they were soft. The grandmother then asked the granddaughter to take an egg and break it. After pulling off the shell, she observed the hard boiled egg.

Her grandmother explained that each of these objects had faced the same adversity: boiling water. Each reacted differently. The carrot went in strong, hard, and unrelenting. However, after being subjected to the boiling water, it softened and became weak. The egg had been fragile. Its thin outer shell had protected its liquid interior, but after sitting through the boiling water, its inside became hardened. The ground coffee beans were unique, however. After they were in the boiling water, they had changed the water.

“Which are you?” she asked her granddaughter. “When adversity knocks on your door, how do you respond? Are you a carrot, an egg or a coffee bean?

Think of this: Which am I? Am I the carrot that seems strong, but with pain and adversity? Do I wilt and become soft and lose my strength?

Am I the egg that starts with a malleable heart, but changes with the heat? Did I have a fluid spirit, but after a death, a breakup, a financial hardship or some other trial, have I become hardened and stiff? Does my shell look the same, but on the inside am I bitter and tough with a stiff spirit and hardened heart?

Or am I like the coffee bean? The bean actually changes the hot water, the very circumstance that brings the pain.. When the water gets hot, it releases the fragrance and flavor. If you are like the bean, when things are at their worst, you get better and change the situation around you. When the hour is the darkest and trials are their greatest, do you elevate yourself to another level?

How do you handle adversity? Are you a carrot, an egg or a coffee bean?

The happiest of people don’t necessarily have the best of everything; they just make the most of everything that comes along their way. The brightest future will always be based on a forgotten past; you can’t go forward in life until you let go of your past failures and heartaches.

Most of us love a glass of wine over dinner or a cold beer on a hot summer day.

In moderation, it can make us feel good. It’s part of our culture. We enjoy sharing a few drinks with friends.

But what happens physically and mentally when you quit alcohol for 30 days? I tried this simple experiment in 2010.

Seemed easy enough. I wanted to test my self-discipline. Little did I know then that 30 days would turn into six months, which became one year. After five years, it’s now part of my lifestyle. Life is simply better without alcohol.

People often ask me about my story.

I was a journalist for 20 years, and alcohol was part of the culture. I’d enjoy a few quiet beers during the week and go a little harder most weekends. It all seemed like good fun.

But on March 12, 2010, I awoke with a shocking hangover after a particularly fun night at the South by Southwest Festival in Austin, Texas. END_OF_DOCUMENT_TOKEN_TO_BE_REPLACED

Hindsight. We love it. Too bad we can’t have it beforehand.

That first year after your divorce can be a real humdinger. There’s so much going on, so many new things happening, and so many emotions floating around. In retrospect, you wish someone would’ve told you the specifics, as far as the things that get better or easier.

Here’s what I wish I’d known during that first year:

1. You don’t have to be perfect all of a sudden. Sure, people are watching (mainly your ex and your in-laws) to see how you do. But that doesn’t mean you have to be superhuman. Stop scrubbing the cat box with your old toothbrush at 3AM and forget about getting up an hour early to do your makeup.

2. You’re alone now, but not forever. Yes, you will find someone else one day, if and when you want to. Right now, just find the blessings in being alone. There are plenty.

3. Your mother will get over it. Really.

5. Your bed might seem empty at first … but later on, you’ll revel in the fact that the whole thing is yours. The whole thing.

7. That weight gain or unwanted weight loss will right itself. The emotional eating will go away. The stress-induced starvation will, too.

8. Forget what you lost; recognize what you’ve gained. The good and the bad are gone. But a whole new world, full of possibilities that only you get to choose, has opened up to you.

10. You didn’t fail; your marriage failed. You’ll go on to triumph at other things and one of them might even be marriage.

11. Don’t discount the little things. Closet space. Your favorite foods on the menu. A bathroom all to yourself. Ugly but comfy jammies. They all matter.

13. He was an idiot, anyway. There you go. Someone said it for you.

14. You don’t have to figure it all out this week. Make mistakes. Take your time. Shelve things for later. Shake it off. Your life just changed completely. You have a lot of new things to learn. Give yourself the patience you’re giving your kids.

15. This too shall pass. Whatever it is, it’s temporary. Unless it’s good, in which case, you should keep it.

Everything’s new. Things are in upheaval. You’re up one day and down the next. But every day, you’re one step closer to a happy and fulfilling new life that you will rock.

So, take a deep breath and remember that this is just the first week, month, or year